The video game industry generates more profit than the film and music industries combined. And it’s not about to change, partly thanks to the French.

Remember: not so long ago, less than a decade ago, talking about or writing about a phenomenally successful mobile game on a site specializing in video game news such as gameblog, then led to widespread outcry and trench warfare in the comments. From, of course, video game enthusiasts, but “the real one”, not that of smartphones and tablets.

Today, for better or for worse (or maybe right in between), France is the European champion in mobile video game downloads.

A huge and constantly growing market

Small international context first. As revealed by the AFJV (HASgovernment FFrench for the Jhad Video) which shares the conclusions of a data.ai survey, video games would generate 222 billion dollars in 2022, and mobile games would represent 60% of this total.

It’s only a quarter on the Apple App Store.

we are the Champions

And so, without much more precision unfortunately, we learn that France is the 1st market for game downloads in Europe, but also that with China and Vietnam, France was the country to experience the strongest growth. quarter-over-quarter in 2022. In terms of spend, USA and Japan remain the largest markets. 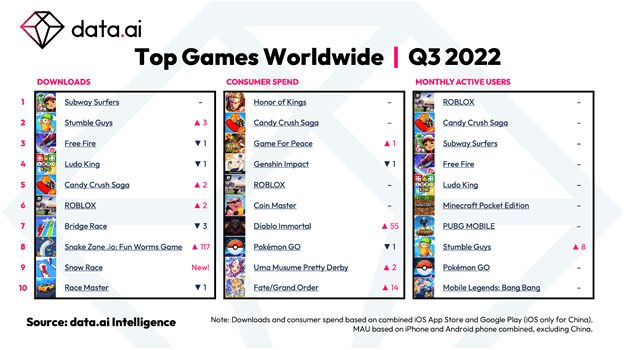 Finally, the games. The podium of the most popular titles is as follows: Subway Surfers in terms of number of downloads, Honor of Kings in terms of profitability and Robloxin terms of active users each month.

And then there is Diablo Immortalwhose setbacks did not prevent its success, as the AFJV also explains:

Blizzard’s game launched in June amid a strong backlash from fans of the franchise over the way it was rolling out micro-transactions. Despite this, the title was instantly popular, with the iPhone version of the game reaching No. 1 on the Top Games by Downloads chart in 122 markets, and in 16 markets on Google Play. In terms of gross receipts, the game managed to achieve #1 gross receipts ranking in more than 27 markets for iPhone and 5 markets on Google Play.

Season 8 is now available on Netflix!

a South Korean romantic comedy to discover now on Netflix

Esprit d’Hiver on Arte: what is this anxiety-provoking Christmas tale with Audrey Fleurot?

selection of the best Amazon offers